When I rescued Domino he was 4 years old. He started his life by being abandoned on a beach in South Carolina. He was a lucky boy and was taken to a no-kill shelter Paws Place Inc. where he was adopted out several times and then returned for one reason or another. The last time a man with two sons adopted Domino but the man brought him back because “his kids did not feed him on time.” After that Domino was depressed and he started to lose weight because he would not eat, so the shelter 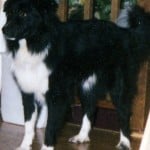 placed him in a foster home. That is where I first met him. When Domino came home with me he was very reserved. He did not play with humans. He would just sit and watch my family, not sure he wanted to join in. You could see that he was guarding his heart. He was not going to fall in love with another family just to be discarded. It took Domino 4 months to decide to be part of my family and it was nothing that I did. My niece Rachel was coming down for her summer visit. Rachel’s dad had passed away a couple of years earlier and since then she always spent a week or two with Aunt Robin in the summer. This special day we planned a day at the lake. We rented a pontoon boat and some jet skis – of course the dogs came along. It was having all the kids around for the week that brought Domino out of his shell. I am telling you the truth when I say I could see the look on his face when he decided it was safe and he wanted to be part of my family. Domino is now 14 years old loves to go for walks or play at the dog park. He still does not play with humans, but he will let you pet him and once in a while he will bestow upon you one of his rare kisses. Rachel is now 22 years old and will be down for her visit this week. I am so lucky that my life has been full of people like Rachel and dogs like Domino. Following is a poem that was given to me the day I adopted Domino. I may not know a lot of things; but I do know I never want to add Baggage! 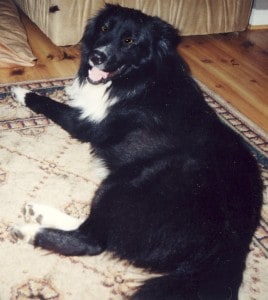 All nicely tucked in my warm new bed.

There is so much to carry –

So much to regret.

And there by my leash hides Fear and Shame.

I still have to unpack my baggage called Pain.

I loved them, the others, the ones who left me,

But I wasn’t good enough – for they didn’t want me.

Will you add to my baggage? Will you help me unpack?

Or will you just look at my things –

And take me right back? Do you have the time to help me unpack?

To put away my baggage, to never repack?

I pray that you do –

I’m so tired you see, But I do come with baggage –

Will YOU still want ME? 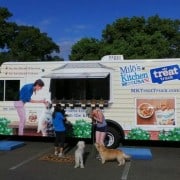 Things To Do With Your Dog In and Around Atlanta 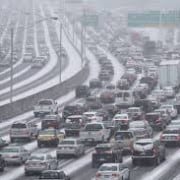 An Upcoming Event at Lenora Park in Snellville

Fun things to do Around Town with Your Pet

Around Town With George